Want to score a social media SuperBowl touchdown? Here’s how

Have you contracted Pigskin Fever? Because an increasing number of Australians have, and it’s created a moment business owners can use to jump on the hashtag bandwagon.

Believe it or not, around half a million Australians will watch the game on Channel 7 this year – not bad for a sporting contest that starts at 10am on a day most are at work.

It’s a contest drawing more attention each year, so how can you capitalise on Australia’s growing obsession with tight-ends, running backs and drag routes?

There’s nothing quite like a well-timed promotion or offer, but one tied to a sporting contest can create a bit of buzz for your company.

Could you offer 10 percent off your product if Tom Brady throws three touchdown passes?

What about applying a discount to the outcome? If the Patriots win, then customers get a percentage off their next purchase, and if the Falcons win, you’ll throw in an added service at no extra charge.

It’s just like a regular offer, but its buzz is tied to the big game.

Look at the ads

Did you know that a lot of people don’t care about the game, but watch for the gazillion-dollar ads during the breaks?

The ad breaks are the SuperBowl of advertising, and watching the masters at work is always a good way to learn.

How are advertisers selling their products?

Do the ads have a cheeky tone? Are they tied to a particular offer? Are they encouraging social media advertising? Are they going after competitor products?

Try applying their thinking to your own brand. Could the same tactics work for you?

A lot of brands try to newsjack the conversation on social media to draw attention.

For example, if there’s a trick play which astonishes everybody during the game, meme-generators around the world with run hot with witty jokes to share via social media.

It’s part of the fun of watching sport in the age of social media.

The best brands have figured this out and are simply joining the conversation. If you can join a brand message with a moment everybody is talking about, you can jump on the bandwagon and cash in on the cachet.

Oreo did this during SuperBowl in 2013 when the lights went out and won the internet. 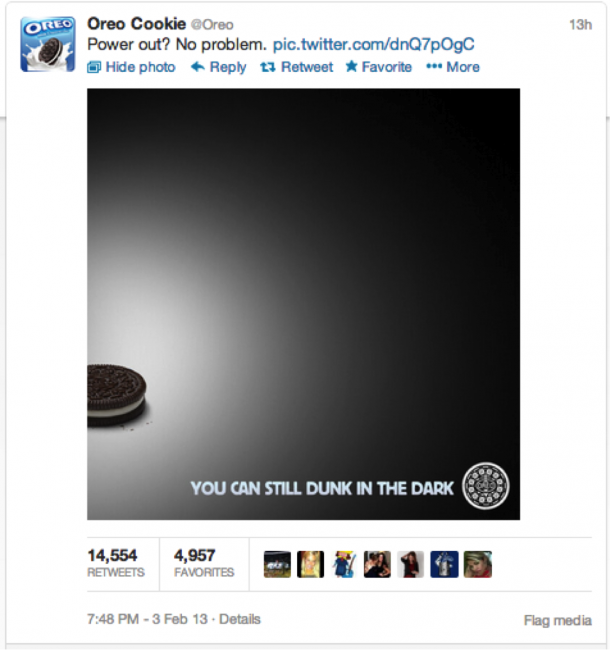 I’ve got a fever, and the only prescription is MORE TOUCHDOWNS

Actual fans of the New England Patriots or Atlanta Falcons could show their pride by decking out their store or business in team colours.

Imagine customers walking into your workplace and taking photos of your outlandish decorations to share on social media?

Get creative, show your pride and your customers may end up doing the marketing for you.

Despite its growing popularity downunder, the NFL is still a bit niche around here.

To avoid crafting an advertising or social media message which is irrelevant to the majority of the people who see it, use keywords and hashtags like #SuperBowlLI to make sure your message is included in that stream.

Digitally savvy marketers could target people on Facebook who say they are fans of the NFL, the New England Patriots or Atlanta Falcons.

This sort of targeting gives you the best shot of reaching the people who’ll be most receptive to your sports-related messaging.

Small business SEO: A guide to getting found in Google