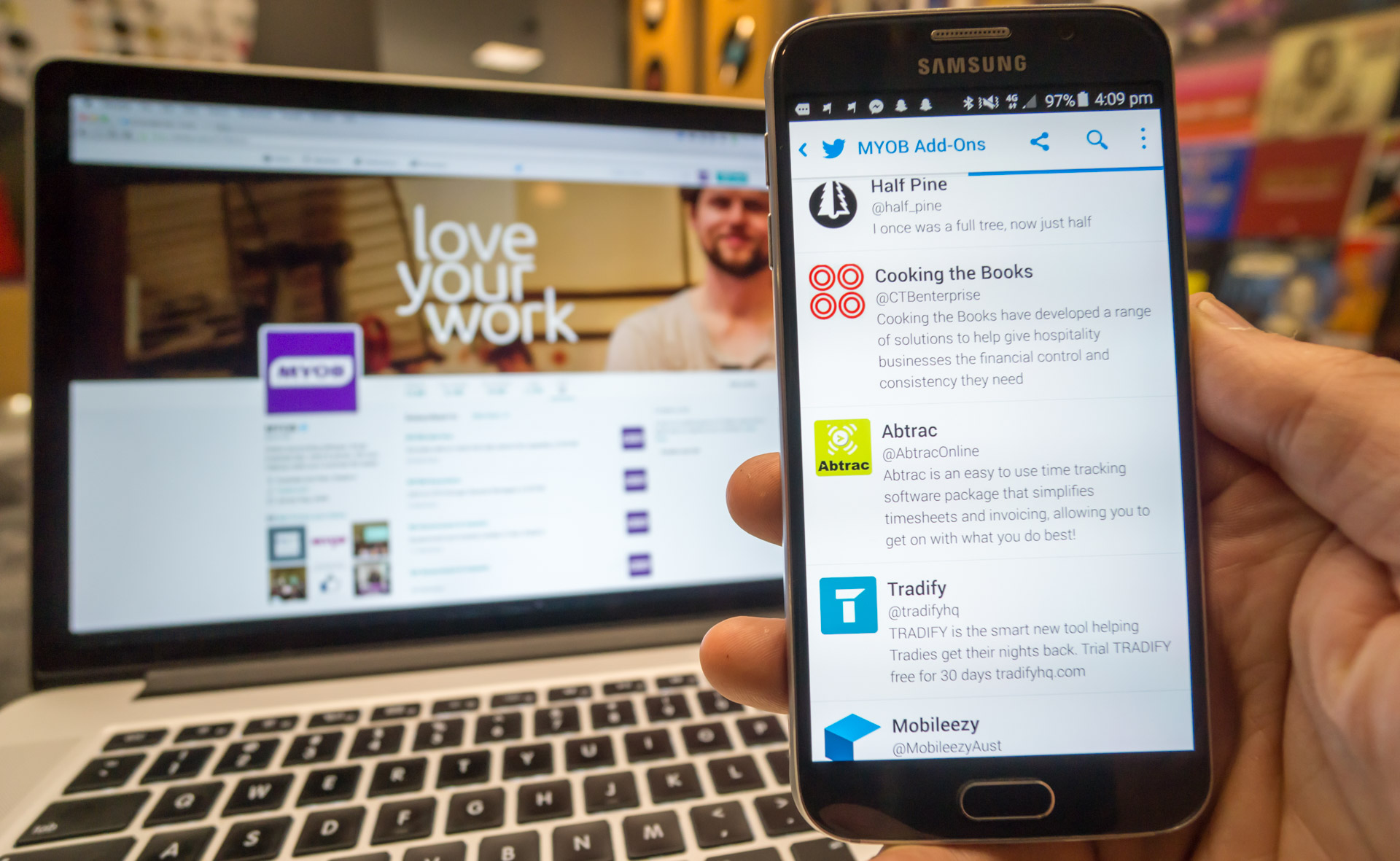 In Part 2 of our two-part series on Twitter for accountants and bookkeepers, our social media specialist Steven Wright breaks down the parts of a tweet, guides you on how to engage and shares curated lists of who to follow.

When you sign up for Twitter, you’re often on your way to having a range of tweets being sent your way. How you behave is totally up to you, but to give you an overview that will let you run your own race, let’s break down a Tweet from @DebraAnders0n.

Hovering over each of the icons with your mouse (or touching them on your phone), you can Reply, Retweet (and see who’s retweeted via the number next to it), Like or select More.

In this tweet, there are a few @handles. Every time you put an @ symbol before a word, the person whose handle it is will be notified. It might be a person or a company, but in essence, it will get their attention via a Twitter notification.

There’s also a #loveyourwork hashtag. Hashtags are great for topics, or to convey a general feel to the tweet. Both @mentions and #hashtags are clickable, leading you down the twitterverse of discovery (if you like). When crafting your tweets, avoid going crazy with these because a sea of hashtags and mentions can look pretty spammy. For more on on Twitter etiquette (or Twetiquette), here’s a nice summary.

Hitting the reply button will let you respond directly to the person who wrote the tweet, but the others mentioned will also be included. Depending on who you want to send a message to, you might wish to remove some of the other handles, or leave them in. You might join the conversation, wish them luck, or offer a different point of view. In essence, you’re joining a conversation, with potentially a stranger, so just remember to be courteous and respectful.

Also, as much as reply is a tweet in its own right, people who follow you won’t see it unless they follow both you and the person you’re tweeting. That’s not to say it’s private, but it won’t show up in their feed. You might notice tweets that start with a . (full stop) before the @handle. That’s a little trick to ensure your followers see it – sometimes you might want your Tweet to be more widely known.

A retweet is often considered an endorsement, but not always. In general, it’s you wanting to share their message. When you hit the retweet button, you’ve got an option to add your own own comment. This allows you to add your own commentary and create your own tweet that links to the original tweet. Or you can just Retweet – the ball’s in your court.

Easy. You like it, you’re being supportive, you’re giving it a ‘tick’.

Lists are great, because they let you follow a range of people without the bother of having to find them. Lists are hand-made, and you can check out the MYOB lists, which will hopefully get you on your way. 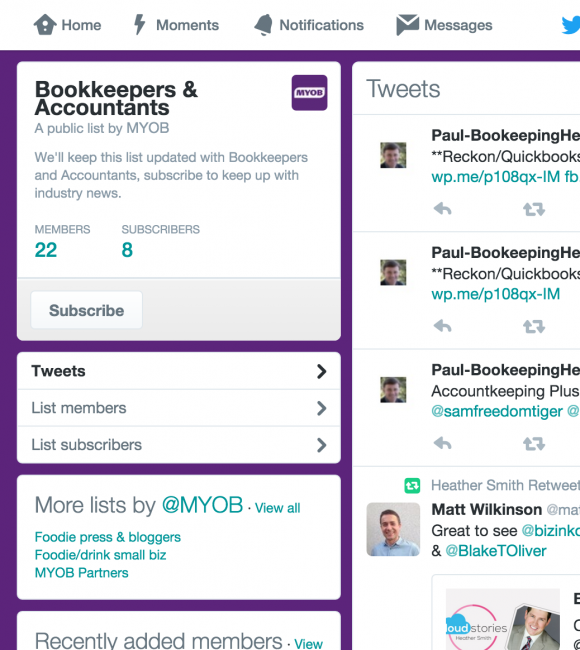 Also, if you’ve got any suggestions for who should be in any lists who might be missing, please shout out. We’re more than happy to make inclusions and changes where needed.

Now that you’ve got a clearer picture of how to tweet and how to engage with others, the best thing to do is to give it a try and subscribe to some lists. Check out the links below and subscribe the ones that are relevant to you. Like magic, you’ve got a rich and meaningful Twitter feed.

As for next steps, see our curated lists with relevance to Accountants and Bookkeepers:

Representative groups for a variety of industry related to the Accounting and Bookkeeping fields.

Full of accountants and bookkeepers who blog and tweet about all things accounting-industry. Many of these handles tweet about more than just business, but are a great group to really get started.

Stay up to date with the core MYOB Executive team who tweet, and generally cover a mix of business, MYOB related news and personal material

These are the developers who help make MYOB even better. They build tools and services that use the MYOB platform and help make custom solutions to solve specific problems. This group contains a mix of small startups, some of the bigger add-ons, through to some people behind the business.

The following lists are of people, business and organisations who tweet with a more regional focus. The list sizes are varied and will change over time.

Building friendships in your business networks