Ever wondered how much PR value you can get from a single tweet?

Take a leaf out of Elon Musk’s playbook.

There’s been a lot of debate lately around the state of South Australia’s energy market.

Tech company Tesla picked up on the conversation, and promised that it could solve the crisis within 100 days with its battery storage tech.

After some PR high-fives all round, Atlassian founder Mike Cannon-Brookes took it to the next level.

He publicly reached out to Elon Musk to see if it was a serious promise or just marketing fluff.

What Elon Musk did next is a great example for savvy small businesses to follow: he doubled down. 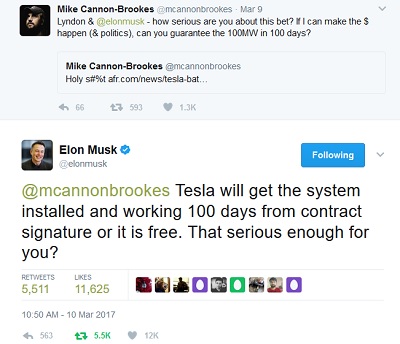 Brands both big and small are always looking for a way to insert their brand into topical conversations.

If done well, it’s a great way to attract brand attention. For example, if there’s a big sporting event on, there’s no reason your brand can’t jump in on ‘the conversation’ brewing on social media to generate a PR return.

Marketers like this approach, because if it’s done with enough imagination and smarts it can give you a bumper bang for buck.

For example, it costs much, much less to compose a tweet than to run a radio campaign – but the tweet may end up getting more engagement than the radio ad.

But what Elon Musk did was different – he backed it up with a definable exchange of value.

Where Elon went beyond

Musk, more than likely, didn’t tweet about the issue because he wanted a marketing return on it – he’s just passionate about battery storage and advancing the conversation.

But he offers a guide for businesses hoping to stand out.

He didn’t just offer a thought, a meme, or observation on a current event – he offered value.

Musk offered to solve a problem – which is what the startup mindset is all about.

He saw a problem being discussed in the news cycle and offered to solve it with the application of his company’s tech.

Musk even offered a tailored solution, instead of just saying ‘our batteries can solve that issue’.

Musk’s approach could be termed loosely as ‘problem-jacking’.

Instead of noticing a news event playing out on social media in real time, he noticed a problem happening in real time.

People were talking about a problem they wanted to solve, and Tesla and then Musk offered a specific tailored solution.

Advertising can be counter-productive if it doesn’t offer potential customers tangible value – when it’s less about the customer and more about promoting the brand.

But this wasn’t ‘We have the world’s best batteries! CALL US NOW!’. This was ‘Hey, get in touch and we can work through how to solve your problem’.

It’s a subtle difference, but one worth noticing.

So, how could you win friends and customers by leading a conversation with the listener’s problem rather than what you can offer?

Tesla/Musk’s exchange played out on social media – but there’s every reason you should take this approach to the real world.