What you wanted to know about this year

We at The Pulse publish a lot of posts about all sorts of things, so knowing what people are clicking on is a great way of taking the pulse (!) of the SME sector.

After all, very rarely do people tell you about their media consumption habits truthfully.

In no particular order:

What you clicked on

3 signs an employee is on the way out

Holding on to good staff is high on the list of challenges for business owners.

Contributor Susan Rochester takes you through some of the typical reasons why people leave, and what you can do to keep them.

What did Google just tell us about the future of work?

When Google does something, people generally take note.

What it did in San Francisco earlier this year got people talking, and thinking, about what work will look like in the next 20 years.

Why staff should stay home when they get sick

‘Soldiering on’ at work is a really outdated idea.

MYOB General Manager of People and Performance, Alla Keogh, gives you the low-down on why it’s a bad idea for employee and employer.

What’s the deduction on the ATO’s radar right now?

This year the ATO decided to go after one thing that 6.3 million people claim to a collective tune of $1.8 billion each year. Will it be looking at this next year too?

Why it’s crucial to switch off at 5pm

We’ve all found ourselves putting the final touches on a ripping Powerpoint presentation at midnight.

Here are a few of the numbers, and some of the science, on why that’s a really dumb idea.

What does scrapping 457 visas mean for SMEs?

And this one was a doozy.

Lessons from Adele: Stuffing up with grace

Is there anything Adele can’t do? From being awesome and winning Grammys to featuring on our best-read list.

Contributor Terri Psiakis tells us what lessons you can glean from one of the rare times Adele stuffed up.

The best way to keep employees from leaving

This was a bit of a recurring theme this year.

In this piece, we go through why giving your employees a sense of purpose is the most powerful tool in your kitbag.

3 reasons why your clients lose trust in you

Once your clients lose trust in you, it could very well be Game Over.

Susan Rochester goes through the reasons this happens, and how to avoid it.

How to start a food truck

We can neither confirm nor deny whether most of traffic on this post came from Fitzroy and Surry Hills.

It’s something we’ve all dreamed about at one point, but it’s hard to know where to start — unless you read this post.

What you all Facebooked (it’s a verb now)

The way many of you find our articles is on Facebook. 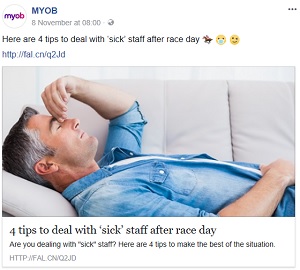 4 tips to deal with “sick” staff after race day

Did you know that sick days tend to increase after an event such as the Melbourne Cup where good spirits (more    than one kind) are flowing?

No matter what you think about it (and 11,000 readers had thoughts about it), it’s a fact of life — so best to be prepared. 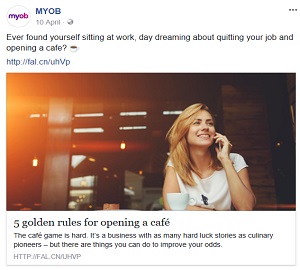 5 golden rules for opening a café

We’ve all dreamed about (at least 4460 people anyhow) chucking in the 9 to 5 and opening a café to brighten people’s mornings.

But, it turns out it’s complicated – and industry advisor Ken Burgin lets us in on a few tips. 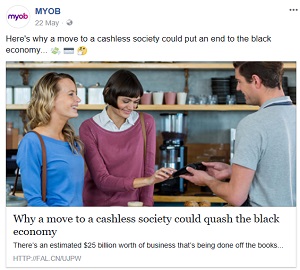 It turns out that people get fired up (well, at least 4400 of you do) by the concept of a cashless economy, but it’s something that happening. In fact, shopping centres are even phasing out ATMs.

Whether or not you like the shift, the move could be great for getting more tax dollars into government coffers – which means more money for roads, schools and hospitals.