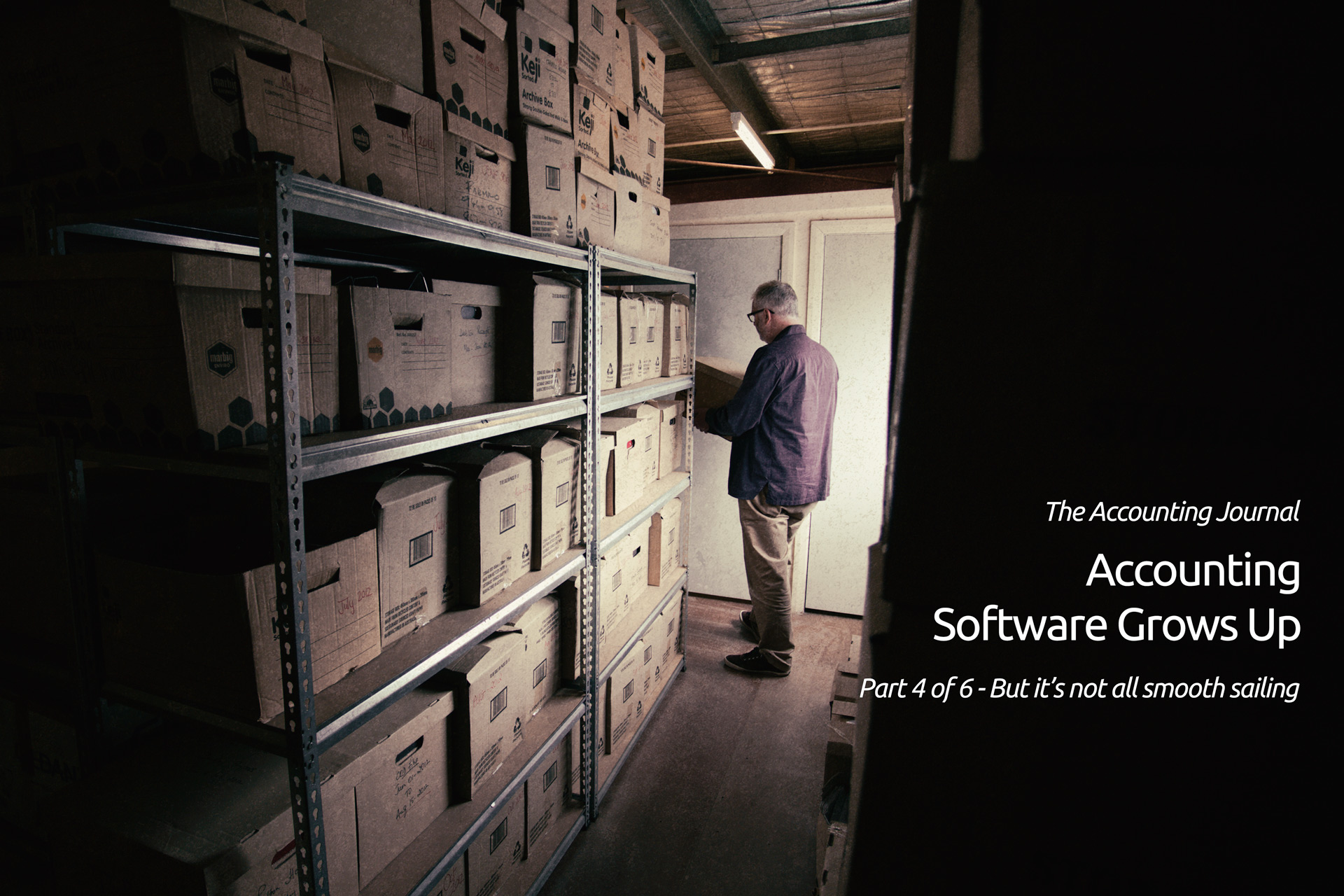 https://www.myob.com/au/accounting-software/payrollPart 4 of MYOB’s 6-part series on the history of accounting – from its origins to today, and beyond. Check out Part 3 here.

As we showed last week, the era of accounting software arguably began in 1955 with the first privately-owned Univac 1 handling payroll for a General Electric appliance factory in Kentucky, USA.  Then some stuff happened, and now everything is sorted, right?  Actually, it’s not quite that straightforward…

Early accounting software was bespoke, painstakingly handcrafted literally byte by byte over the course of months. While it represented an obvious step forward from employing hordes of people chugging away on adding machines and carrying stacks of paper all over the place, there was still a great deal of room for improvement.

As time passed, computer capacity grew to enable the use of higher-level development tools.  These allowed people to define and encode business rules without needing to understand everything down to the basic wiring of the machine. True computer languages and programming frameworks followed.

Probably the first report generation “language” was developed in 1959 for the IBM 7090 and known as “9PAC”.  At the time, storing and accessing structured data on computers was still in its infancy, and some concepts from 9PAC formed key parts of the development of early relational databases.

Throughout the 1960s, companies invested in producing proprietary accounting systems tailored to their particular requirements.  Jobs would be run in “batch” mode, often overnight, with only a select few permitted to see or access the computer directly (frequently, this did not even include the programmers!)

However, computers continued to grow in capability, and the idea of building one generalised application with flexible features which could be customised to each client’s needs became reality in 1973 with the introduction of SAP RF.  Over time SAP’s product line grew into a modular system capable of handling a wide variety of business chores, but the original goal was to allow decision-makers to ask financial questions and get prompt answers with fewer intermediaries.  Simplifying the interaction with the data stores meant that more people could derive more value from their computer investment.

Peachtree Software (later Sage 50) took the industry another big step forward in 1978 when they introduced the first software product for the then-new “personal computer”.  This allowed companies to automate their accounting for a cost in the thousands, rather than hundreds of thousands or even millions of dollars required by a minicomputer or mainframe solution.

Ben Dyer, Peachtree founder, on customer support:
(from a 2004 interview by the Software History Center)

“Our dealer plan […] gave us Tier 1 support out on the field. At least we were able to handle all the first line questions like, ‘What’s a credit or a debit?’ A lot of people didn’t understand accounting, so we ended up providing accounting education as much as computer support. But we were able to handle it pretty well through our dealers and we fairly quickly figured out that we needed support people separate from our internal developers, because the developers found it very irritating to be interrupted and try to answer some question. So we had to organize around that and we had sufficient revenue coming in to afford to do that.”

Peachtree expanded its offerings and by 1981 had the first integrated office suite including a word processor and spreadsheet, which could run on a variety of brands of computer hardware.  (Microsoft also “invented” the integrated office application suite, seven years later!)

Intuit was founded in 1983 and launched its Quicken product, the first application aimed directly at individuals and families.  This simultaneously expanded the potential market greatly, while introducing a new dimension in the development of accounting applications – the need for making user interfaces clear and accessible, which proved a far bigger challenge than getting the calculations right.

Also in the early 1980s, an intrepid young company known as Teleware Inc developed innovative and eye-catching accounting software which caught the eye of Best Software, who moved boldly to purchase Teleware in 1993.  A few eventful years later, the Australian publisher of the product bought out the company, and in 1999 changed the name to – did you guess yet? – MYOB Limited…

Today, accounting software handles almost all of the nuts-and-bolts of tracking the movement and uses of money for virtually everyone in the world.  Advances in hardware and the rise of mobile technology mean we no longer must be tied down to bulky and expensive boxes in order to gain their benefits.  Modern user interfaces are friendly and accessible at a glance, leaving us more time for the human elements of our business.   And all from such humble beginnings!

More to the story…
THE TROUBLED EARLY YEARS OF THE SPREADSHEET

The basic idea of tracking accounts and making projections using a grid-lined piece of paper, or “spreadsheet”, dates back hundreds of years.  Nowadays we can hardly imagine performing these functions without the help of a computer, of course.

As with many major technologies (like the computer itself), the electronic spreadsheet has many “creators”.  The names most commonly associated with the computerised spreadsheet are Dan Bricklin and Bob Frankston, co-creators of VisiCalc in 1979, and it’s with them our story will begin.

However due credit should be offered to Rene Pardo at Bell Canada.  Ten years earlier in 1969 he, with partner Remy Landau, co-developed most of what we now recognise as the fundamentals of spreadsheet software (and tried to patent the ideas – though he did not succeed until a precedent-setting case in the 1980s opened the door to software patents)

Pardo’s software framework, known as LANPAR, ran on mainframes and was highly successful for several years across a range of enterprises, including the entire U.S. telephone industry.  It reduced the time to make updates on a key AT&T budgeting spreadsheet from 6 months or more down to just a weekend!

There are a number of other semi-interactive report generating frameworks from the mainframe era which can lay claim to being forerunners of the spreadsheet.  But the product that really put spreadsheets on the map for SMEs as well as end users was the introduction of VisiCalc for the Apple II personal computer.

At the time, the microcomputer market was new and growing wildly in every direction; no one could tell where it was headed.  IBM had yet to bless this new product category with an entry, so it wasn’t as unusual as it may now seem to release a major piece of business software for the Apple ][.

“The idea for the electronic spreadsheet came to me while I was a student at the Harvard Business School, working on my MBA degree, in the spring of 1978. Sitting in Aldrich Hall, room 108, I would daydream. “Imagine if my calculator had a ball in its back, like a mouse…” (I had seen a mouse previously, I think in a demonstration at a conference by Doug Engelbart, and maybe the Alto).

And “…imagine if I had a heads-up display, like in a fighter plane, where I could see the virtual image hanging in the air in front of me. I could just move my mouse/keyboard calculator around on the table, punch in a few numbers, circle them to get a sum, do some calculations, and answer ’10 percent will be fine!'” (10 percent was always the answer in those days when we couldn’t do very complicated calculations…)”

VisiCalc was an instant hit, selling hundreds of thousands of copies.  It’s credited with boosting the fortunes of not only the publisher Personal Software (later VisiCorp), but of Apple Computer, and some said, the entire personal computer industry.

Compute magazine said “Every Visicalc user knows of someone who purchased an Apple just to be able to use Visicalc”. Until the IBM PC debut in 1981, if a business had any sort of personal computer on the premises, it was almost certainly an Apple ][ (quite likely smuggled in behind the backs of IT!)

Of course VisiCalc was offered on the IBM PC as one of the first business applications available.  For compatibility reasons, however, it did not take full advantage of the capabilities of the new machine – which proved to be a fatal strategic oversight.  But at the time, VisiCorp was rolling in cash and busy launching a range of other products (several were quite impressive in their own right); they could not see competition for their cash cow on the horizon…

In 1982, a former product manager for VisiCalc had left to start his own firm. Mitch Kapor had a vision of a far more advanced and easy-to-use product, and founded Lotus Development Corporation.

Introduced in 1983, Lotus 1-2-3 offered an integrated database, graphing features and a WYSIWIG interface, as well as taking fuller advantage of the ever-advancing capabilities of affordable microcomputer hardware.  The market switched to 1-2-3 in droves – within months, VisiCorp was foundering!

By 1985, Lotus had bought out Software Arts and quickly discontinued the virtually defunct VisiCalc.   As you’d expect, lawsuits began to fly.  Software Arts had sued Lotus, and Lotus sued copycats which sprung up (establishing a legal precedent for copyright of a user interface in the process) and so on.

Meanwhile, Microsoft had launched their own spreadsheet for the then-revolutionary Apple Macintosh, called Excel.  It represented another major leap forward for spreadsheets in ease-of-use and power, but the IBM PC platform was clearly dominant in businesses by then.  Consequently, Apple products struggled outside of their usual strongholds in the home and educational markets.  Microsoft made Excel available on the PC platform along with its first version of Windows, in 1987, and thereafter the product began to gain marketshare steadily.

In 1987 Mitch Kapor left Lotus, and the company’s distinctively progressive character seemed to shift.  They focused on competing head-on with Microsoft on its own playing field, eventually building their own full-fledged integrated office suite and committing to IBM’s OS/2 platform (a Windows alternative) to the detriment of their Windows offerings.  They also continued launching “look-and-feel” lawsuits against competitors.

With 20/20 hindsight, what happened next is all too familiar… History took its course once again, and in 1995 the former giant Lotus was purchased by IBM, which gradually wound down its brand and product presence over the next decade.

Today, of course, Excel remains the dominant spreadsheet on the market.  But if you use Windows* and want a taste of nostalgia, you can still download and execute the original Visicalc from Bricklin’s website!  (System requirements: at least 32kb of RAM, minimum 2-colour display, and pretty much any CPU at all… note: 64-bit Windows systems may not be able to run this)