The Accounting Journal: the Univac changes everything 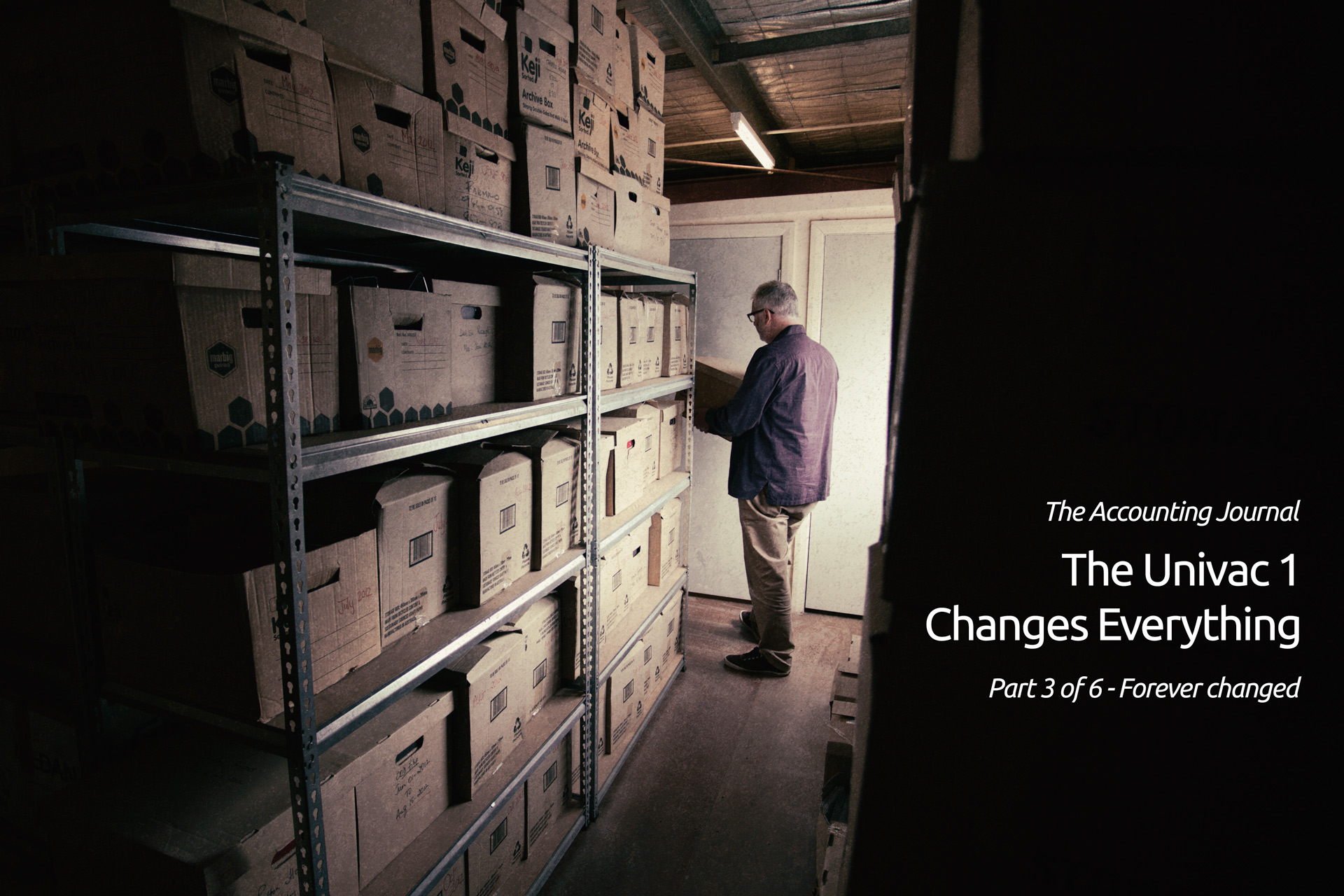 Part 3 of MYOB’s 6-part series on the history of accounting – from its origins to today, and beyond. Start from the beginning with Part 1 and then check out Part 2.

No one can point to a specific date signifying the start of the computer age.  The incremental developments and occasional breakthroughs which lead to the technology we now think of as “computers” can be traced back to dozens of innovations spanning centuries.  So today’s digital electronic computer acquired its modern form quite gradually over time.

In fact, the term “computer” has been around for hundreds of years – until the mid-20th Century, it referred to a person whose job was to calculate sums!  (similarly, “spreadsheet” used to mean a chalkboard marked with grid lines on which you’d record and systematically update sets of numbers – using a computer for this did not begin until the 1960s, and we’ll have more on that in part 4)

It’s also impossible to pin down a date for when mechanical calculation aids came into their own, although by the 20th century they’d reached a fairly advanced level of sophistication: running on electricity, handling basic arithmetic and even printing. One noteworthy example is the IBM 301, a punch-card tabulator dating back to 1928 which could process 100 cards per minute.

However, history does record a milestone for the first recognisably modern computer sold to a business concern for accounting uses, or at least payroll – it began in 1955 (60 years ago, according to my calculations…)

Back then, the earliest workable electronic computers had already made their mark in niche fields, especially military and scientific applications.  But commercialising these massive, finicky beasts proved to be another matter.

One of the very first Univac installations for a private corporation (rather than a university or government agency) actually began in 1954.

With the Univac 1, Remington Rand beat punch-card titan IBM to market by just enough to garner the first enterprise customers.  But in those days, delivery and installation of a computer took months – never mind getting engineers trained to program and operate them!

The 30-ton Univac 1 had been unveiled back in 1949.  It made a name for itself in popular culture by correctly predicting the outcome of the 1952 U.S. presidential election, going against many newspaper and TV pundits (who all reckoned General Dwight D. Eisenhower didn’t have a chance…)   That same unit was delivered to the U.S. Census Bureau in 1953 to help process data from the 1950 census, which at the time was still being painstakingly tabulated by buildings full of civil servants.

General Electric was already a major manufacturing powerhouse in the early 1950s, building on experience and industrial capacity garnered during World War II.  They were among the first to embrace the modern technologies and management strategies which came to characterise the United States’ economic expansion over the coming years.

GE purchased a Univac for its new appliance factory in Kentucky in January 1954, and by 1955 it was online, handling some industrial control and planning functions.  A separate team of engineers had been developing software to handle GE’s complex payroll needs.  This followed the advice of an Arthur Anderson study which had recommended Univac over IBM, concluding that its ability to handle large quantities of data on magnetic tape instead of punched cards would lead to significant labour savings.

The first programmers didn’t have an easy time of it – as the old joke goes, ‘all they had were ones and zeros, and sometimes they didn’t even have the ones’…  the system was arcane, debugging tools were non-existent and computer languages had yet to be invented.  Even basic projects were without precedent, and could take months.

Once you got your software running, GE’s complex union labour agreements and Univac’s eye-poppingly primitive technology (by our standards anyway) meant the payroll job took over 40 hours to run when it was first tested, towards the end of 1954.  Some accounts claim that it wasn’t until 1956 that the process was improved enough to be truly practical.

But the first Univac 1 deal quickly lead to a landslide of further sales, with IBM and other companies leaping into a burgeoning market.  The computer’s benefits were so obvious that the early teething problems and high costs were happily borne by companies determined not to be left behind!

Next week: the maturation of accounting software proves to be a bumpy road…

A Visual History of Calculators from Ben Scott

You May Also Enjoy:

More to the story…
ARTHUR ANDERSON AND THE “GLICKIAC”

The venerable Arthur Anderson accounting firm had been among the first to realise the value of electronic computers, thanks in part to project manager Joseph Glickauf. According to this Computerworld magazine article, he had an innovative approach to demonstrating the potential of this new idea:

Glickauf built a small-scale model – soon dubbed the “Glickiac” – to demonstrate the speed of electronic computing. “That little Glickiac only added 10,000 units per minute, but compare that to an adding machine,” he said.
Basically, the Glickiac was an electronic counting machine – in binary, of course – with flashing lights. For the demo, Glickauf would have the audience count along with the machine and then turn up the speed, faster and faster. “The neon lights were flashing and you couldn’t even see them – and pretty soon, it was far beyond the speed that anyone could possibly count. But it was a very vivid demonstration and drove the idea home that we were talking about something that was beyond anything we’d ever seen before,” Glickauf said.
At a January 1951 meeting, the Glickiac demo was powerful enough to persuade Arthur Andersen partners to devote whatever resources were required to get into the computer consulting field before anyone else did.
In 1952, Arthur Andersen got its first engagement: a feasibility study for installing an electronic computer at General Electric’s Appliance Park in Louisville, KY – at the bargain price of $64,000.
Eventually, Glickauf became head of Arthur Andersen’s administrative services division and held that position for 12 years during a period of dramatic growth fueled by business adoption of information systems.
So, does that make Glickauf the father of computer consulting? “I would say so,” he said. “I don’t like to take any credit, but I had to be.”