Taking the Internet of Things from smart to smarter

If you’re familiar with Google Home (or Amazon’s Echo) then you’re pretty much up to speed on the Internet of Things (IoT). But where are the opportunities for smart entrepreneurs?

The IoT hooks up any device with an on/off switch to the internet to create a giant network of connected ‘things’ (including people).

Chances are you’ve already seen the ad for Google Home, the ‘smart’ speaker  you can talk to in order to interact with your other devices, appliances and services. Tell it “OK, Google: dim the lights” and the unit responds by dimming the lights (while the rear end of the person still sitting on the couch grows just that tiny bit bigger).

IoT is kind of wonderful and kind of worrying (will we talk to our devices more than our kids?), but more than that: it’s a business opportunity to create the ‘smart’ things we really need…

The example that gets rolled out in every IoT conversation is the smart fridge that knows you’ve run out of milk and orders more.

But the smarties who came up with the keg that never runs out of beer were onto solving a problem that people really care about.

READ MORE: Smart business and the Internet of Things

Smart gaps in the market

The smart toilet roll holder is an obvious opportunity (or is that just my house?). The smart holder knows when you’re nearly out of bogrolls and orders more before you run out.

While we’re in the smallest room of the house, imagine a smart loo – tricked up to analyse your…you know…and relay vital health information back to you based on its analysis.

Do you need to eat more fruit? Smart loo lets you know and adds it to your shopping list.

Are you brewing a kidney infection? Smart loo makes you a doctor’s appointment.

Are you spending too long sitting there, just scrolling through social media? Smart loo posts a photo of you on Instagram with the caption “Thirty-seven minutes and counting…”

And forget the smart fridge – give me the ‘smarter’ fridge any day of the week. It doesn’t just know how to replenish its own contents, it can also be programmed to deny someone access. 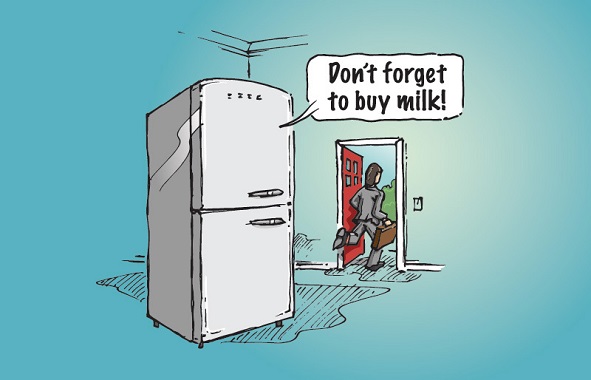 For example, it won’t let you in unless it’s received confirmation from your smarter fitness tracker (see below) that you’ve done your requisite amount of exercise for the day. (The only reason we exercise is so we can eat crap guilt-free afterwards, right?)

As someone who works from home, I want a smarter fridge that’s on to my procrastination tactics and doesn’t let me eat TimTams during my work hours. And – just quietly – I’d also like to program a monthly timetable so that when my PMS is off the charts I GET FRIDGE ACCESS FOR TIMTAMS WHENEVER THE HELL I WANT.

READ MORE: How to work from home without losing the plot

If your blood sugar is low, it fires up the jaffle-maker.

If your stress levels are up, it shuts down all your news and social media feeds and instead broadcasts something soothing.

If you’ve fallen asleep on the couch, it makes sure you haven’t left the bath running or the oven on.

And if you’re in a good mood with strong endorphins, it blocks any phone calls from the tax department/telemarketers/your mother-in-law.