What’s the difference between working at a non-government organisation (NGO) and a fast-paced tech startup accelerator?

In a word: everything.

Zoe Condliffe, one of seven founders in the new SheStarts cohort, made such a change for her new, unique challenge.

Having successfully created social change in the NGO space, Condliffe is now trying to enact social change with her tech business.

Condliffe is working on this via She’s a Crowd that offers a platform where women can tell their stories of gender-based violence. Those stories then become anonymised, data-led insights.

The platform is at the minimum viable product stage, but Condliffe is excited about where it could go.

Condliffe told The Pulse, “If you were a university and you wanted a three-kilometre radius to cover your campus, you could select that and we could give you a data report from that area.”

The university could use the data to change the campus surroundings so they’re safer for women.

Also, greater insights on the university’s gender-based violence could be provided instead of mapped-out sites where harassment incidents have occurred.

Condliffe has been passionate about gender equality and addressing gender-based violence her whole life. This fuelled her NGO role to drive change before launching into the SheStarts project.

Before She’s a Crowd, Condliffe worked on a map-based initiative called Free to Be, where women could anonymously upload their harassment stories on Sydney and Melbourne streets. These scenes were then plotted onto a map as ‘hotspots’ to show where it was rife. 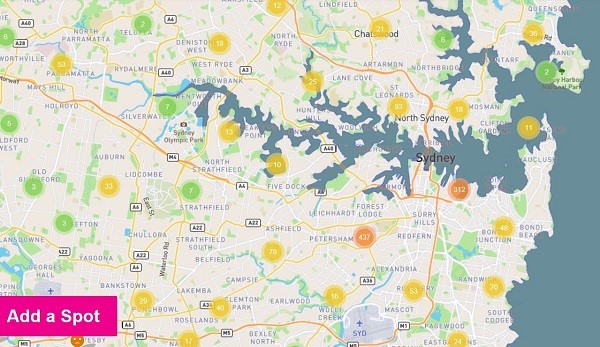 From the Free to Be site

Condliffe was the Free to Be’s project lead, and although she had no tech experience to speak of, she got the taste of what tech platforms can do.

“That opened my eyes to how much more there’s to do in the data collection space around this issue. So many people understand that it’s a problem – they don’t have the hard data to fix the problem,” said Condliffe.

“If the right people can’t access this data in the right way, we’re really missing those huge opportunities to create long-lasting change.”

The question of how tech could help curate that dataset led Condliffe to set up She’s a Crowd and then the SheStarts accelerator.

The hardest part about being in a tech accelerator, in her view, isn’t the coding. It’s how to sell the business proposition.

Condliffe says she committed to build out She’s a Crowd as a business proposition so the project had continued sources of capital.

With NGOs, funding relies on grants and donations and Condliffe hunted out another way to enact change by creating a business and securing funds for social change on an ongoing basis.

So, she’s needed to take a crash-course in pitching her desire to enact social change as a commercial proposition.

“It’s like learning a new language,” said Condliffe “I’m not really used to explaining business propositions and market opportunities and all that stuff to different people.

She says straddling between wanting a sustainable business and having the maximum social impact has been tough, but taking one day at a time is getting her there.

“How do you weigh up how to be true to your vision and meeting what the customer wants?”

“You can’t pivot too much from your original aim and just build this thing for one customer and then another customer comes along wanting something completely different.”

But, Condliffe’s admits the speed of development in a tech accelerator is mind-warping, given her NGO background.

“When we want to do something, we just do it,” Condliffe said. “It’s done the very next day – as opposed to twelve months later and it still hasn’t been done.”

The biggest lesson she’s learned in the accelerator is backing herself when swimming in a sea of well-meaning advice.

“It’s a fine line between trusting myself, because this is my company, being open-minded and embracing new ways of doing things – that’s why I’m here,” said Condliffe.