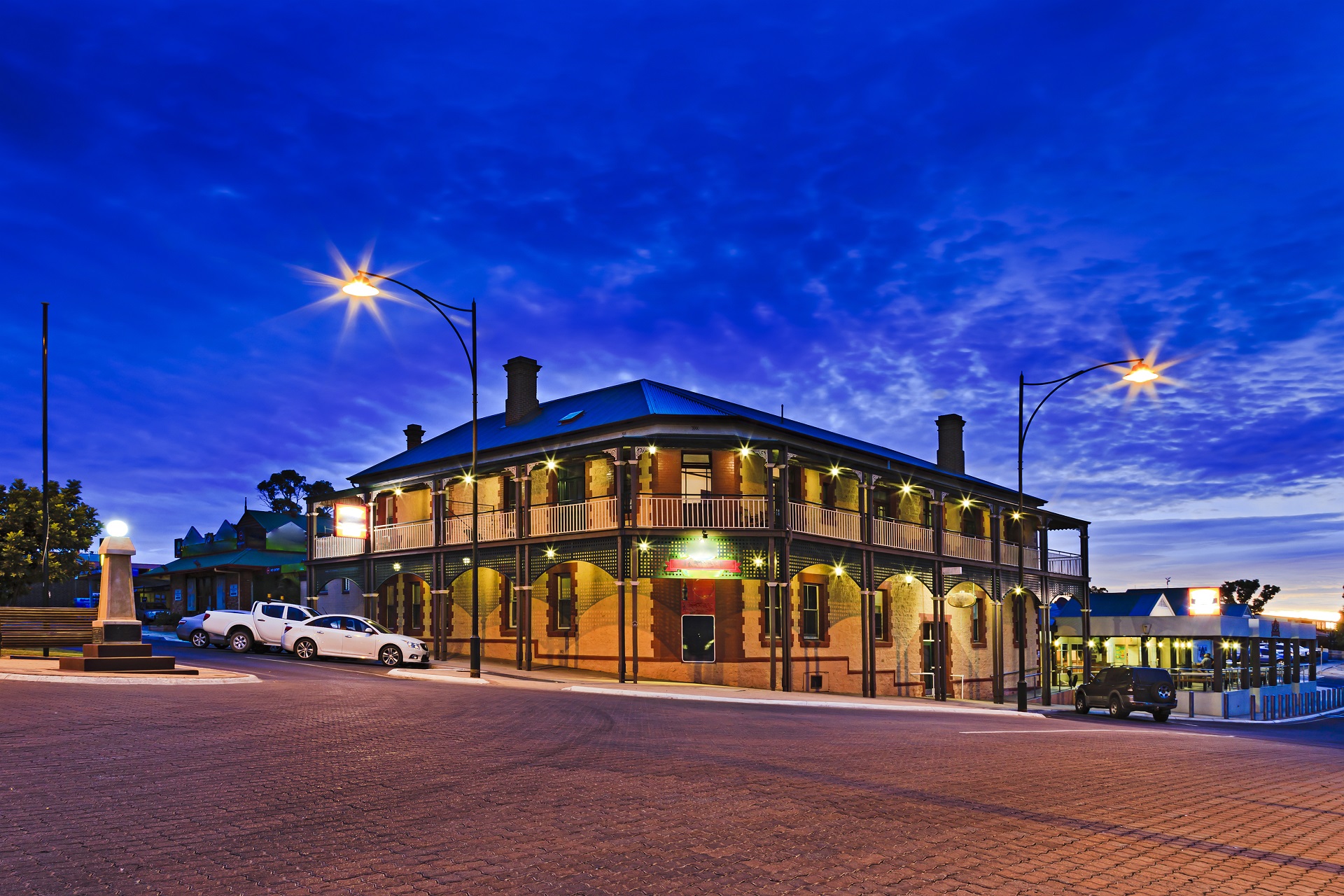 Encouraging more SMEs to take up shop in regional areas is vital to our democracy. It’s a big statement, but stay with us here.

One of the bigger themes running through politics on the world stage is the ability for candidates once considered outsiders to get into office.

In all these instances, part of the analysis has centred on the fact that while economic growth in these countries has occurred, it hasn’t been evenly spread.

Earlier this year HowMuch.Net looked at where job creation had taken place in the US in 2015 – no prizes for guessing it was rather spotty in nature. 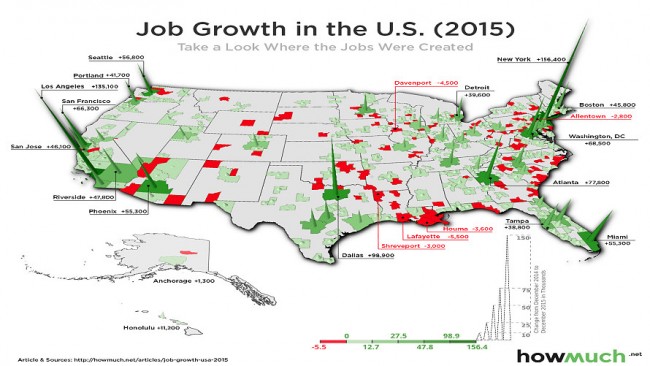 Over the past few years there has indeed been a recovery in the US economy, and the headline figures look pretty good.

On the ground though, the situation wasn’t great for a large part of the country.

In this context, a message around ‘Making America Great Again’ found some traction while a continuation of the same was rejected out of hand.

Now look at where the economic activity takes place in Australia. 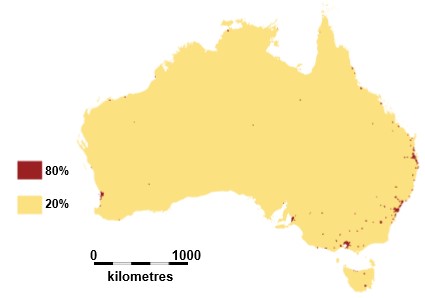 Australia already has one of the most concentrated pockets of population in the world, with 58 per cent of our population living in our largest four cities.

It’s why MYOB chief executive Tim Reed says the next wave of economic growth must be broad-based.

“That doesn’t mean the type of industry hand-outs that occurred to the auto industry which started as one-offs, but then grew to being a permanent requirement.

“Instead, more needs to be done to attract existing, performing businesses to move jobs to these regions.”

Even though the recent resources boom played out in our regional areas, most of the wealth was concentrated in Australia’s major capital cities.

The next wave of economic growth is expected to come from the ‘knowledge economy’, and you can guess where those jobs will be generated.

If all the wealth is slated to be generated inside the CBDs of our capital cities, life may not look so rosy for those living outside of them.

With manufacturing, which has traditionally served the outskirts of various capital cities, coming off the boil it’s become vital to make sure our regions aren’t left out of the economic picture.

Especially since the situation’s about to get worse.

The rise of the knowledge economy

Marion Terrill is the transport leader with independent think tank Grattan, and to estimate the future infrastructure needs of the country she first needs to forecast where exactly the economic activity is going to take place.

“The kind of businesses that are growing now are in the knowledge economy,” Terrill said.

“We’re seeing the growth in jobs coming from business services, finance, and those kinds of industries. Those are much more city focused and there’s a lot less in agriculture and manufacturing.”

With the mining construction boom over and the manufacturing sector continuing to decline, the next wave of economic activity is starting to come through.

Overwhelmingly, those jobs are city-based.

Terrill says the reason knowledge economy jobs are found in the CBD areas of major cities is pretty simple – it’s all about talent.

Employers want to draw on the widest available pool of talent, and jobs in the knowledge economy rely on face-to-face interaction.

“People in those jobs share information and network both formally and informally,” Terrill said.

“In some other kinds of jobs, that is not the case, like warehousing or manufacturing for example.

“For the activities where there’s a lot of human interaction it’s very advantageous to be in the one area. All around the world that means cities, particularly the centre of cities.”

That’s why even within cities, there’s a huge spike towards the CBD. 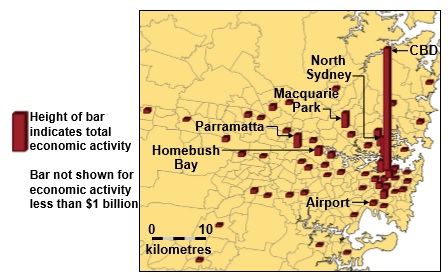 Above is a map of the Sydney area, with the CBD absolutely dominating the economic activity.

With the rise of the knowledge economy, this could become even more concentrated.

Intracity hubs such as Paramatta do offer some diversification in economic activity, but across Australia that set-up is rare.

“Paramatta is interesting because it’s a second CBD and it’s probably on the scale that it could work. It actually draws on a pool of people that the Sydney CBD would not have access to,” said Terrill.

“It is fairly rare though. We don’t see that in Melbourne so it’s fairly unique.”

She said attempts to set up work clusters within city areas, such as industrial parks, had been met with limited success.

Instead it has been the market which has led the development of particular areas.

“Governments have been trying for at least 100 years to influence where jobs are and the latest version of that is trying to set up precincts. These haven’t worked very well,” said Terrill.

“Where employers set up their business is a commercial decision.”

While the government may have limited success in setting up dedicated zones of economic activity, particularly within the knowledge economy, Reed says there could be another solution at hand.

“I think it’s important to make sure Australians facing unemployment have sufficient resources to retrain for new careers, or accessing guidance and support to start their own businesses,” he said.

One of the major themes running through the closure of the Hazelwood coal power station in regional Victoria has been how to make sure the workers losing their jobs not only got a fair payout for redundancy but how they could thrive in the future.

Finding a way to make sure workers losing their jobs in regional areas while white collar jobs in the CBD thrives is not only the right thing to do, but could be vital to preserving our democracy.

Where there is a group of disaffected people, there is the potential to sell them an anti-establishment message.

Activist and filmmaker Michael Moore described Donald Trump as a “human Molotov cocktail” that the dissatisfied could throw at the establishment which had failed to provide economic security in their region.

Making sure that the wave of economic growth that is to come simply isn’t confined the CBD of cities could be key to making sure a similar disruption isn’t flung at Canberra.