Why the cashless society is coming

Australia was an international leader when it changed its monetary notes from paper to polymer, and we should again be leading the transition into a cashless society.

A cashless society is no longer science-fiction and Australian businesses, governments and consumers are well placed to take full advantage of the shift.

Already, Australian consumers have made leaps in this direction, embracing technology such as Paywave, Apple Pay and Android Pay.

The way we pay for goods and services is constantly evolving.

Consider the last time you paid for something using a cheque, which are officially being phased out by 2018. Cashless is the logical next step.

It’s something the government is cracking on with as well, with the recent federal budget confirming that cash transactions of more than $10,000 will be banned as part of a broader suite of measures aimed at cracking down on the black economy.

But, as with many monetary trends, the cashless push is being led by consumers.

According to Reserve Bank of Australia research, consumers prefer to pay electronically for convenience and these days people are comfortable using debit and credit cards, even for small purchases.

It’s far easier to tap and go for your morning coffee than fiddle around in the bottom of a bag for loose change.

But there are still barriers preventing customers from paying for more on cards – chief among them being surcharging costs.

Why surcharging is a bad idea

MYOB research has consistently found that consumers have enormous dislike for paying surcharge costs on any transactions, particularly smaller ones.

Our research found that 8 out of 10 think it is unfair for businesses to be passing on surcharging fees. For purchases worth $100, more than half of consumers expect to be charged nothing.

Most damning of all a quarter of consumers claim to have walked away from a purchase because a surcharge was being passed on.

Businesses will need to build into their operating costs that, in the cashless future, consumers don’t foresee surcharging. 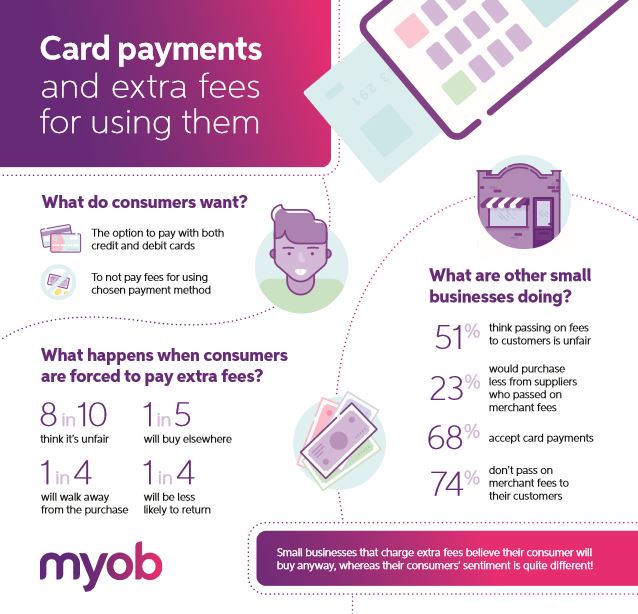 While the issue of surcharging is contentious, there is a huge amount to be excited about around the cashless society and plenty of opportunities for businesses to take full advantage of this shift. One of the big positives will be increased security.

Businesses with a shop-front will benefit from having no cash held on premises, potentially protecting them from the dangers, costs and general nuisance of break ins and errors in cash calculations.

Going cashless would also eliminate the time and money it costs businesses to deal with physical money. Businesses will reduce bank visits and avoid the need to balance the till.

In many cases removing these tasks would cover the extra credit card fees they may incur.

Even more costly to the country is the black economy. In this years’ federal budget papers, the government estimated $25 billion worth of business being done off the books, leading to a black hole in government revenue.

Given the current budget deficit, it’s little surprise the government is trying to crack down on this unpaid tax and embrace the cashless society as a way of solving this problem.

The government’s taskforce into the black economy has investigated a move to a cashless society.

“The Taskforce also intends to examine whether there is any reason for businesses to operate on a cash only basis given the availability and increasingly low cost of non-cash payment methods today.”

With many more clear-cut advantages to a move away from the old $2 coin or $5 note, it’s time for Australia to embrace a cashless society.